Metal-metal interactions in paramagnetic, multinuclear transition metal complexes are critical to the reactivity of metalloproteins, and understanding them is important in the development of functional metal-containing polymers. Particularly, the bonding and spectroscopic properties of the interesting unbridged paramagnetic dimers that are held together only by metal-metal bonds have remained unexplored.

In a combined experimental and computational study, researchers from PNNL have, for the first time, syntesized and isolated a stable unbridged dimetal radical, [{CpW(CO)2(PMe3)}2]•+ (1•+). Relativistic density functional calculations revealed that the SOMO is an M-M antibonding π orbital, and aided spectroscopic assignments. Calculated TDDFT spectra were in agreement with experiment and assigned the characteristic near-infrared (NIR) absorption at λmax = 966 nm to a π → π* transition to the SOMO. Spin-orbit coupling DFT yielded EPR parameters in very good agreement with the experiments. 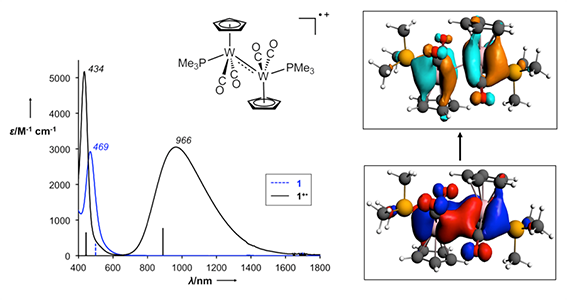