The process of electrical doping, or charge transfer in general terms, was used in the early stages of developing organic electronics when conducting polymers were first discovered. Since then it has been largely unexplored in stark contrast to how it has revolutionized conventional inorganic semiconductors.  It is only in recent years that the doping finds its way into broader areas of organic electronics, where complete control of the doping process is required to keep the extra charges in check.  A growing body of experimental data, however, seems to have created more confusion than understanding as to why doping takes place in the first place; for instance, a low-lying donor HOMO transfers charges onto a high-lying acceptor LUMO, or a certain high-lying donor HOMO will not transfer enough charges while another donor HOMO lying barely above the acceptor LUMO transfers one full charge.

In delivering a definitive answer to this fundamental yet practical question, Joo and Kim used (dispersion corrected) DFT calculations to uncover that intramolecular geometric changes during charge transfer are in command of everything.  This is surprising because charge transfer is considered to be an intermolecular process for the most part.  Their work also offers a new paradigm for designing dopants (that we don’t need a super-dopant after all!), along with a practical computational tool to carry out day-to-day search operations. 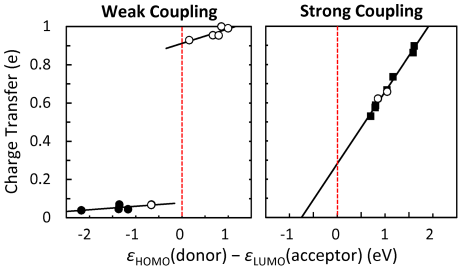