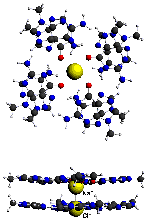 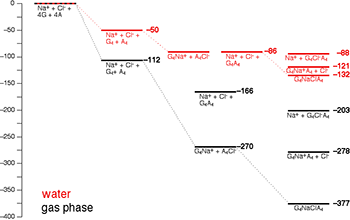 The puzzling feature of cation binding to an A4 quartet (A = adenine) via the four exocyclic amino groups in a tetrastranded RNA molecule prompted them to look into the possibility that what was proposed to be a sodium cation in fact might have been an anion.   The results of their computational analyses lead to the proposal of the stacking complex of a guanine and an adenine quartet, G4A4, as a potent ditopic receptor for table salt, NaCl, in aqueous solution.   Besides the biochemical (structure and stability of telomers in DNA) and potential technological relevance (extracting salt from water) this is also a computational/technical highlight: 8 DNA bases + NaCl (150 atoms), in water, connected through H-bonds, pi-stacking and donor-acceptor bonds.   The computations were all carried out with the ADF program, taking advantage of dispersion-corrected DFT-D, which was crucial for the correct treatment of the stacking interactions.   The QUILD program, a wrapper around ADF, was employed for its superior geometry optimizer based on adapted delocalized coordinates.