In a recent edition of Angewandte Chemie, Eva Zurek, now at the University at Buffalo, along with Peter P. Edwards at the University of Oxford and Roald Hoffmann at Cornell University published a detailed computational analysis of lithium – ammonia solutions. The subject of curiosity ever since they were first observed by Sir Humphry Davy 200 years ago, alkali metal – ammonia solutions can be identified in part by their “fine blue colour”. The eventual conclusion that these systems were not “metal ammoniums” but rather solutions of alkali cations with the ionized electron distributed in the solvent served to add to the intrigue. Now this unusual electronic state, the brilliant color associated with it and the relationship between the two can be explored with Time-Dependent Density Functional Theory (TDDFT). 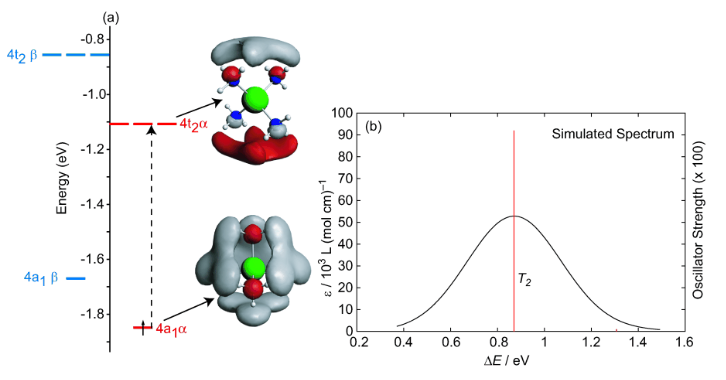 Geometry optimizations of ammonia-solvated lithium ions (simulating bulk solvent with COSMO), as well as computation of the electronic absorption spectra of such systems were done with ADF. Some of the modeling involved radical systems in which a solvated electron is distributed amongst ammonia molecules. Electronic spectrum computations on such open shell systems are not yet commonplace, but the authors were nonetheless able to obtain results that explain the observed visual spectra. Visualization of the modeled spectra and the orbitals involved in the electronic transitions responsible for them are possible with the ADF-GUI. While the connection between the solvated electron and the visible absorbance spectrum of the system has been known for some time, Zurek and her colleagues were the first to establish it using modern computational methods. The exploration of lithium-ammonia solutions conducted in Professor Hoffmann’s laboratory is too extensive to be properly illuminated by this brief summary; those who want to know more should read the full article: