Inorganic chemists are all familiar with the “18-electron rule” for transition metal complexes.   Logically, this leads to a 32-electron rule for inner transition complexes, in which the f orbitals must also play a role.   Computational evidence for this rule has recently been set forth by Jean-Pierre Dognon at the Commissariat à l’Énergie Atomique in Saclay, together with Carine Clavaguéra at Ecole Polytechnique (both in France) and Prof. Pekka Pyykkö in Helsinki, Finland.   Their results appeared in the January 2009 issue of the Journal of the American Chemical Society and the February 2007 issue of Angewandte Chemie International Edition.   It was also highlighted in the December 15, 2008 issue of Chemical & Engineering News. 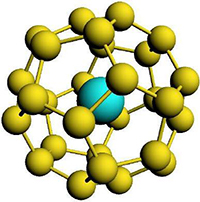 After a first work on An@ Pb12 clusters, the authors modeled energies as well as UV/Vis and IR spectra of several actinide metals encapsulated in C28 cages through the use of DFT and TD-DFT.   For modeling such compounds with these heavy elements, the relativistic effects implemented through ZORA are quite important, for instance in the spectroscopy of these compounds.   Dr. Dognon has also indicated that the bond energy decomposition in ADF, the utility of the ADF GUI for building structures / analyzing results, as well as the good parallelization of the ADF program were all critical to the studies.