“Superatomic” molecules and ions are fascinating species in which polyatomic clusters exhibit properties generally associated with single atoms. One of these such metal clusters, [Pt@Pb12]2-, has drawn the attention of Boris Le Guennic at Université Lyon and Jochen Autschbach at the University at Buffalo, due to its unique Nuclear Magnetic Resonance (NMR) properties. The researchers used the ADF program to compute shielding constants (a component of chemical shift) and spin-spin coupling constants for this superatomic ion, and compared their results to published experimental work. In doing so, they were able to explain the reasons behind the atypically large positive chemical shift calculated and observed in the 207Pb NMR. Their work is published in a special edition of the Canadian Journal of Chemistry dedicated to Professor Roderick E. Wasylishen. 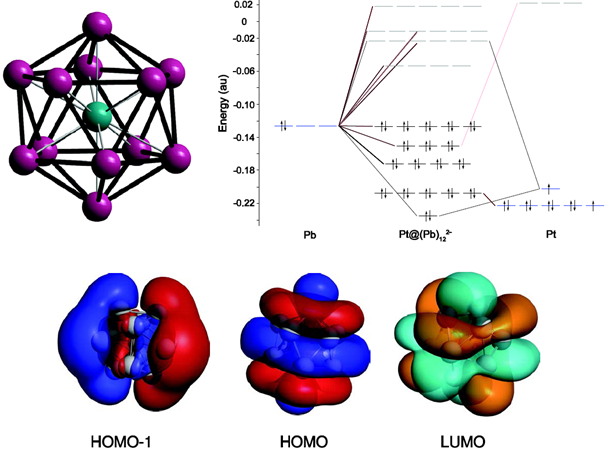 ADF’s ability to carry out calculations with all electron basis sets (augmented with steep functions) is necessary for accurate NMR chemical shielding calculations. The ZORA method facilitates the proper modeling of the relativistic effects that are particularly prominent in heavy elements such as lead and platinum. The effects of spin-orbit coupling were significant, as expected for these heavy metals. The finite nucleus approximation, implemented in ADF by Autschbach et. al, was also seen to play an important role in modeling the coupling constants between these large nuclei.