At the University of Queensland’s Centre for Organic Photonics & Electronics the properties of a family of blue phosphorescent iridium(III) complexes have been investigated using relativistic time-dependent density functional theory (TDDFT), including spin-orbit coupling. In a paper published in Inorganic Chemistry, Smith et al. studied the effect of ortho and para fluorination in fac-tris(1-methyl-5-phenyl-3-n-propyl-[1,2,4]triazolyl)iridium(III) on the phosphorescent radiative rate and electronic excitation energy of the complexes.

The phosphorescent radiative rate, kr, was found to be proportional to the energy gap between the T1 and S3 excitations. Fluorination at the para position increases the energy gap more than ortho fluorination. para fluorination furthermore increases the difference in electron density between the phenyl and triazolyl groups, distorting the complex from octahedral symmetry, and increasing the energy between the HOMO and the HOMO-1. These results give new insights into general design rules and strategies for phosphorescent metal complexes.

The radiative rates (kr) of these iridium(III) complexes are more strongly influenced by fluorination at the para (Y) position. Fluorinating the ortho (X) position has only a small effect on the radiative rate, an important result for developing rules to aid future molecular design. 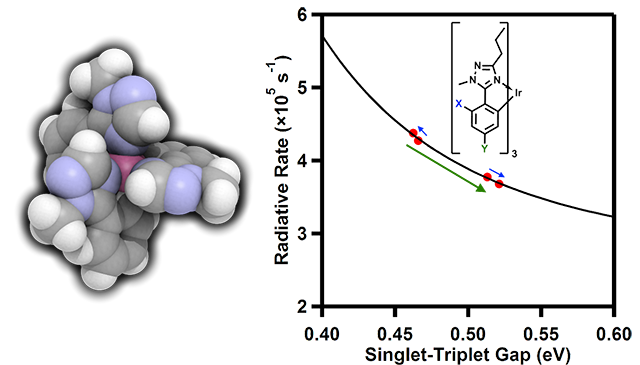