Dye-sensitized solar cells (DSSCs) offer a promising means of harvesting the sun’s energy, and the improvement of their efficiency has drawn the interest of theoretical chemists and physicists. In a 2011 issue of Physical Chemistry Chemical Physics, Abu Md Asaduzzaman and Georg Schreckenbach of The University of Manitoba, Winnipeg reported their results on the modeling of a prototype dye employed in such solar cells. They used ADF and other molecular modeling programs to investigate the I–/I3– redox reaction of a compound known as the “N3 dye”. 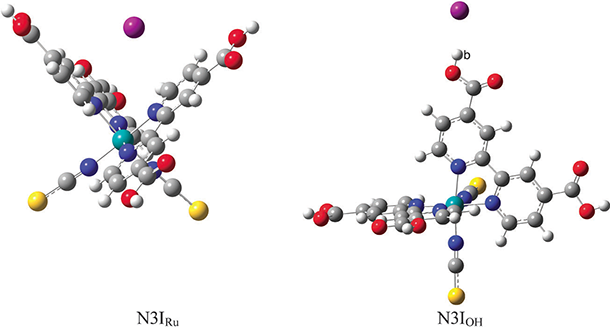 To conduct their study, Asaduzzaman and Schreckenbach carried out geometry optimization calculations of reactants, intermediates and products of the N3 dye reaction. The computed energies of these differing forms of the dye allowed them to model both the thermodynamics and the kinetics of the reaction. Key options in the molecular modeling programs which were used included relativistic spin-orbit coupling (with ZORA), Grimme’s dispersion corrected functionals (DFT-D3), and solvent effects (with a continuum model). The researchers noted that proper solvation modeling was crucial to this study.

Among other things, the authors were able to support the conclusion that the step of the reaction in which the neutral dye is regenerated from its oxidized form is a major factor in limiting efficiency in solar cells comprised of such compounds. Hopefully the knowledge gained in studies such as this will be applied to development of ever increasingly efficient, newer generations of solar cells.

A. M. Asaduzzaman and G. Schreckenbach, Interactions of the N3 dye with the iodide redox shuttle: quantum chemical mechanistic studies of the dye regeneration in the dye-sensitized solar cell. Physical Chemistry Chemical Physics, 13, 15148 (2011).