Oxidative addition and reductive elimination reactions of small molecules possessing high-order bonds (e.g. N2, O2, NO+) is of fundamental interest in transition metal chemistry. As a means to study the mechanism and intermediates of such reactions, the photochemistry of the nitridoosmate(VIII) anion, OsO3N–, was examined by FTIR under matrix-isolation conditions at cryogenic temperatures. Ligand-to-metal charge-transfer (LMCT) excitation of OsO3N– was found to result in N-O bond formation to give the OsII nitrosyl complex OsO2(η1-NO)– as the major product, and a minor population of an intermediate species whose structure could not be fully assigned by FTIR due to overlap in the Os-O stretching region. Photolysis of the nitrosyl photoproduct and its photointermediate with visible wavelengths was found to result in complete reversion to the nitridoosmate parent complex. This transformation represents the first reported example of fully reversible 6-electron reductive elimination and oxidative addition of a nitrosyl ligand.

DFT calculations with ADF revealed a stationary point corresponding to an OsVI nitroxyl complex, OsO2(η2-NO)–, intermediate to nitridoosmate and the OsO2(η1-NO)– photoproduct. Calculated vibrational frequencies and the effect of 15N substitution for OsO2(η2-NO)– reproduced those of the photointermediate observed experimentally, allowing its identity to be assigned to this nitroxyl complex. Results of experimental and DFT studies suggest that the overall transformation occurs in two steps, a two-electron reductive elimination of nitridoosmate to give a nitroxyl ligand, and a four-electron elimination of the nitroxyl complex to yield the major a nitrosyl photoproduct. 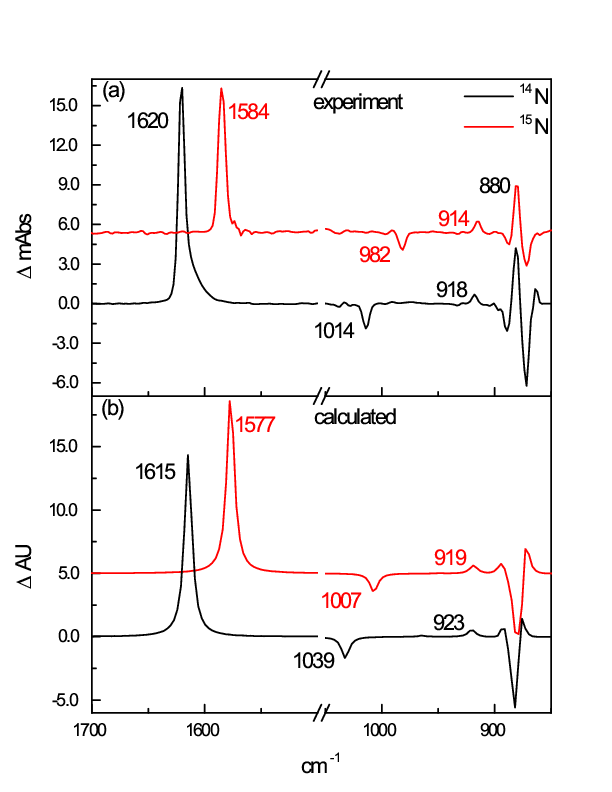