The experiment involved the measurement of intermolecular forces between two CO molecules: one adsorbed on the Cu(111) single crystal substrate and the other on the AFM tip. The experimental results were compared with ADF calculations with TZ2P Slater basis sets and using a dispersion-corrected xc energy functional, PBE-D, to account for the van der Waals interactions that dominate at large CO-CO distances. 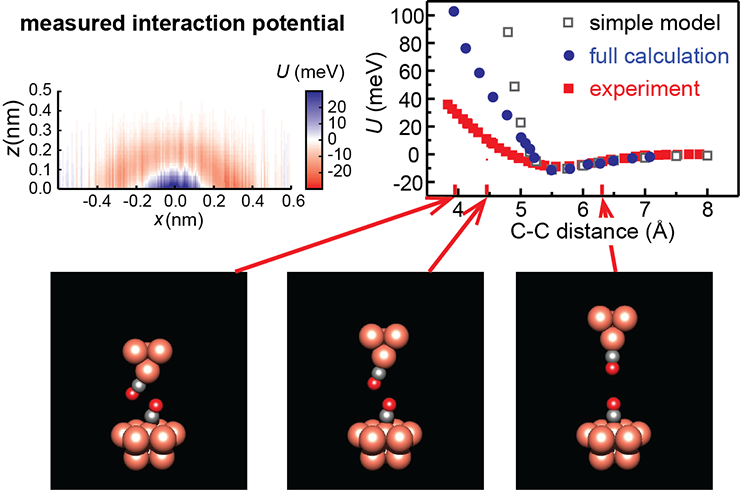 The calculations were performed on two levels. Simple model calculation involving only the interaction between two isolated CO molecules was sufficient to reproduce the experimental results in a semi-quantitative fashion. However, at short tip-sample distances the repulsive interaction was strongly overestimated. Using Cu4 and Cu10 clusters as models of the tip and substrate, respectively, calculations including geometry relaxation of the CO molecules (see Figure) were carried out.

The adsorbed CO molecules reorient when the Pauli repulsion becomes too strong at short tip-substrate distances, which results in reduced repulsive interaction between the AFM tip and the sample. This brings the calculated interaction energy significantly closer to the experimental value.

The atomic reconfiguration at close tip-sample distances limits the achievable resolution both in imaging and force spectroscopy. These effects are expected to be general and occur in all non-contact AFM experiments employing molecule-terminated tips.