Stefan Grimme’s latest dispersion correction is now available in the development snapshots of ADF and BAND. Grimme and his coworkers at the Universität Münster outlined the parametrization of this new correction, dubbed DFT-D3, in a recent issue of The Journal of Chemical Physics 132, 154104 (2010). Here they list the advantages of the new method as the following: 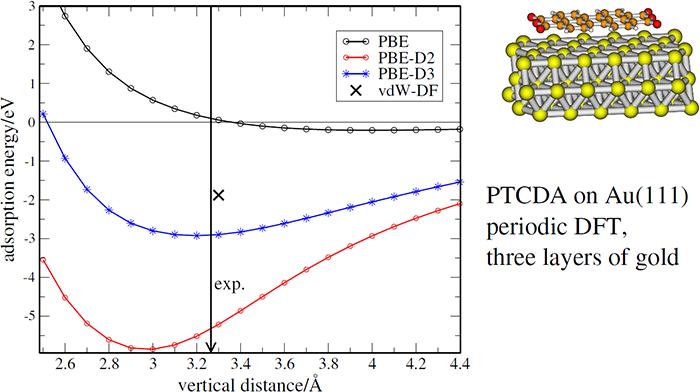 Above: The adsorption energy of perylene-tetracarboxylic-dianhydride (PTCDA) on a gold (111) surface as a function of distance. Results without (PBE) and with dispersion corrections (PBE-D2, PBE-D3) are shown. The experimental distance is 3.27Å. The vdW-DF result is from PCCP, 12, 4759 (2010).

The article continues by, among other things, demonstrating how this new DFT-D version decreases the mean absolute deviations for a benchmark set of non-covalent interactions by 15-40% over the previous version. Professor Grimme notes that the more significant errors in dispersion energy can be expected for modeling highly charged systems. See section III-F of the original paper for more details.

DFT-D3 is now available in the development snapshots of ADF and BAND, versions r23091 and later. They can be downloaded at http://www.scm.com/SCMForms/DownloadSnapshots.jsp. Instructions on the use of this functional can be found in the ADF developer’s change-log at http://www.scm.com/Downloads/ChangeLog-trunk.html.