Long-range corrected density functional theory can ameliorate some of the known problems of DFT dealing with charge transfer states (e.g. push-pull systems). These systems are of great interest for organic electronics, and most recently for the so-called thermally activated delayed fluorescence (TADF) where triplet excitons in OLEDs slowly convert to singlet excitons which can fluoresce. To maximize luminescence yield, usually the singlet-triplet gap of is minimized, while maximizing spin-orbit coupling matrix elements. 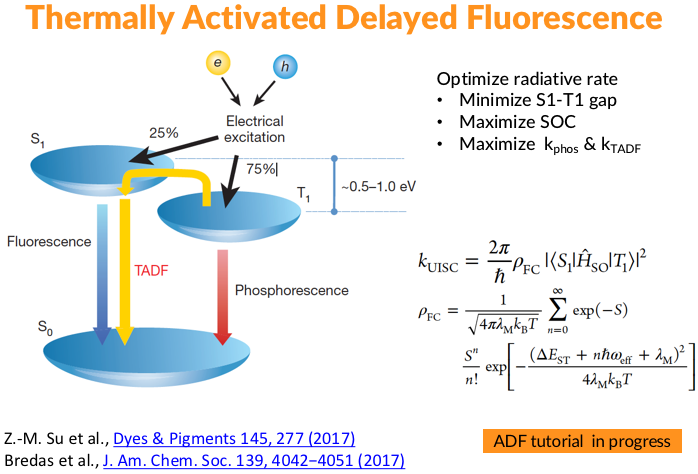 The optimal range separation parameter gamma yields a HOMO energy corresponding to the ionization potential (IP). The optimal gamma will differ from molecule to molecule. Scanning over a number of gamma’s and then further refining is a typical task for which python scripting with PLAMS can make your life easier.

To get you started with tuning range-separation hybrids (RSHs) for your own systems of interest, we provide here an example script to tune LC-wPBE for the push-pull system p-Nitroaniline. In ADF2017 only RSHs with Yukawa switching, available in XCFun, are amenable to changing gamma. So we will work with LCY-wPBE, which differs from the LC-wPBE with error function switching. Yukawa switching actually has higher accuracy for atomization energies and Rydberg excitations, as shown by Akinaga and Ten-no.

Tip: Windows and Mac users can use the pre-configured command line as explained here.

The script first defines the target to optimize. It minimizes simultaneously the difference between HOMO and IP for the neutral and the anion system, the latter being a proxy for optimizing the LUMO as close as possible to the fundamental gap, following the suggestion of Kronik and coworkers.

Then the job type is defined and the molecule read from the Molecule database shipped with the ADF Modeling Suite. We start with basic ADF settings and a large stride in gamma-space, followed by a further refinement around the found minimum with a better basis set and higher numerical accuracy.

In the last part we switch to a TZP basis and run a finer grid around the first minimum:

Make sure to reach out to our support team if you have any questions or problems about scripting for tuning RSHs or for similar tasks which could benefit from automation!

You may also be interested in checking out our advanced tutorial on optimizing TADF emitters including singlet-triplet gap and spin-orbit coupling calculations.